This is THE holly grail of Citizen collectors! This is one of the most sought after vintage watches! This is my dream, my so long waited one and the answer of all my intensive searches!

People ask me where did I find it? I am going to tell you the story of finding this one. 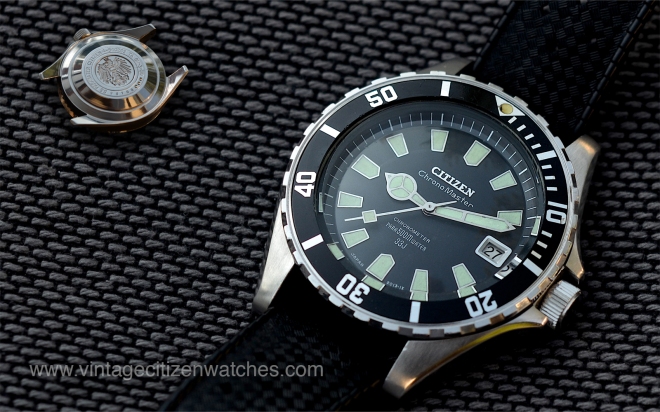 I started collecting vintage Citizen a few years ago. (I write this article in 2015 February) I always loved divers and chronographs. The first watch I had as a kid was a blue Volkswagen quartz “diver”. I still have that one.  Then as time passed I found myself over my head into buying and selling, repairing and loosing money because of my passion, reading, writing, comparing and… you know… collecting. 🙂  I learned that there are fakes, aftermarket parts, interesting watches and common ones. I found out what I like and tried to let the other watches go. I learned not to buy only because it is a good price. I learned a lot and I am still learning. Then about two years ago a piece of information came to me. It seemed that there is a certain diver made in stainless steel, Chronomaster, 500m WR, Chronometer grade. So I started looking for one.  Sometimes I dreamed about it, sometimes I thought I found a lead but time after time,  it was just a mind trick. In all these years I searched for one each and every day. I found four so far. I bought one. The first one was sold as “junk” in Japan for USD 4.100. The second one I found online, on a watch forum, and has a replacement bezel and bezel insert and is not for sale. The third one, on facebook, has a replacement crown, bezel and bezel insert and non original strap and is nor for sale. The fourth one is my watch.

One month ago (2014 December) I was on a trip in Hong Kong and of course I had my share of watch hunting. So I found a vintage watch store that had an Alarm Citizen. I asked if they had any other Citizen and was told to return tomorrow. They will look for more in the back of the store. This is what I did. The next day I saw 5-6 watches and got myself THIS Citizen Leopard. I got the watch and went to dinner. Waiting for the food, I google searched the serial of the Leopard I just got. I might have entered the wrong digits because one among the images I found online showed a Citizen 500m. There was a new image that I didn’t see before. I clicked it. Imagine my surprise when I found that the Chronomaster was for sale in Japan, posted one day before! I tried to translate the page on my mobile and contacted the seller. They were not selling outside Japan. My world tumbled down! I wrote on my facebook page asking if maybe I have some friends from Japan. Eric said yes! So I wrote him. We never spoke before that day but now we are good friends. Thanks Eric! He said he was willing to buy the watch for me and send it my way. To make a long story short, I sent him the money, he contacted the site where the watch was sold, the site contacted the seller, the seller sent the watch to the site, the site said the watch is not ok and maybe they will cancel the transaction if they can’t solve it. The watch was running fast but I didn’t care. Eric said that if they don’t fix it they will not send it. I worried and I waited. What was I supposed to do? Nothing. It was not in my power. A few days later Eric had the watch! Then the watch was on the way to me. 🙂 Let me tell you that the original pictures of the watch were of a very poor quality and I had only a vague idea about what I was buying. Later I found out more information on the watch by talking directly to the seller. This was a very difficult task to achieve. Not easy to find the original owner, trust me on this one. 🙂 So, the only info I got is that the watch came from Kawaguchi, Saitama, Japan. I hope I will find out more. (I found nothing more – 2017)

So this is what I got:  A huge 44mm one piece stainless steel case (uni body case – the movement comes out through the frontal part of the watch, after removing the crystal and the bezel of course), thick slightly domed mineral crystal, unidirectional 60 clicks bezel, screw in crown, rubber strap marvel! I got the whole package! One thing I found (June 2017) is that the eagle engraving on the back is not actually directly on the case but rather on a steel inlay (like the gold inlay used in the dress Chrono Master) I didn’t remove it but I am quite sure I am right. Anyway, back to the story. 🙂 My watchmaker opened the watch only to find a perfect movement as the one in THIS Chronomaster (but Chronometer grade – Citizen 5440). Everything works as it should! I am so happy! 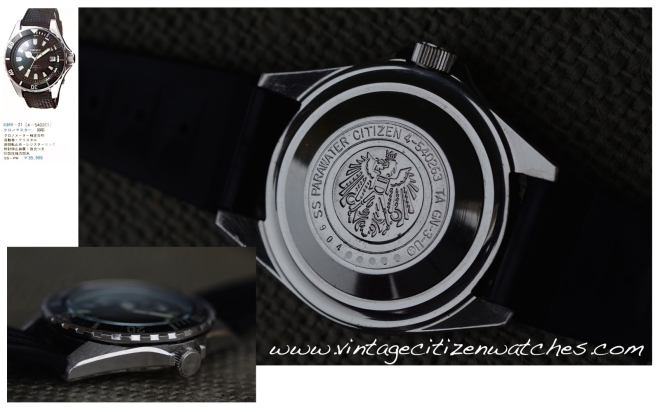 Well… the hunt is over, the dream has come true, the wait was long. I am tired and so happy!

Thank you: Eric (Japan), Stephan (UK),  Jack (Singapore), Fred (Austria), Daniel (Germany) for all your contribution. You all have your part in making my dream come true! Thank you my friends! 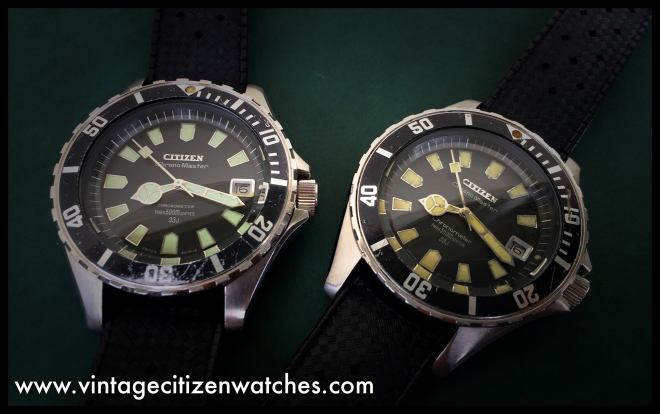 Update 2017: Hard to believe but I found another one for sale in Japan (the best condition I saw, really beautiful!) (pictures below and all credit for them to the seller – Kyotoya – Japan) This one was made in January 1969, the first production date I saw. Here it is: 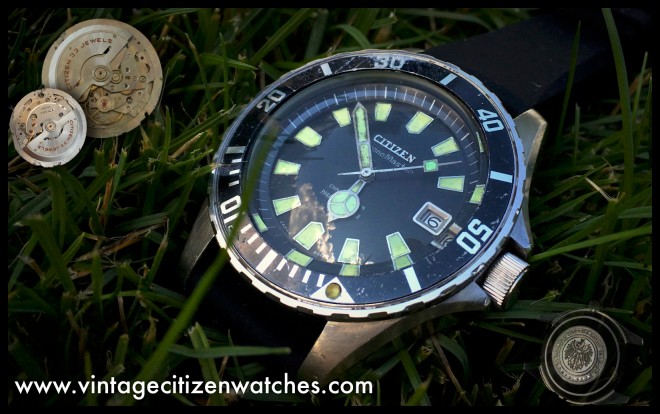 In all the years of hunting these watches I saw only 22 pieces, in private collections or online. I had three of them. Putting together all the serials and details the conclusion so far is:

Read more about how to open this unibody case watch HERE.

Read about another HOLLY GRAIL watch, the Glorious, HERE.

This site uses Akismet to reduce spam. Learn how your comment data is processed.