The emotional connection with our watches is in fact the main force that drives us into collecting them. A 1969 great Moon landing story made the Omega Speedmaster the icon that it is today. Same goes with “Paul Newman” Rolex Daytona, Heuer Monaco and many others. Patek takes the emotional connection to an art form level. Well, now we have a great Citizen story too!

Starting from this post and then with the contribution made on the Vintage Citizen Watches group page on Facebook  by Renato I am here to introduce to you this great story of the Citizen Undersea Treasure. Our hero is the vintage Citizen 150m diving watch model 52-0110. I also contacted the newspaper and Stephanie was happy to provide me all the information they had so far regarding this. Unfortunately they were more into the interesting situation and not into watches so a lot of details I had to figure out myself.

Neil Blakers of Cromer found this awesome watch while “strolling along the beach on Saturday afternoon”  on Long Reef Beach in Australia.  “I realized it was a watch but the face and body were covered in barnacles. It looked as though it had once been growing on a rock or at the bottom of the ocean and been thrown up by a heavy surf” he said. He treated the found object with lemon and grapefruit juice only to clearly notice that the watch was still ticking. In the pictures below the seconds hand is in a different position so the watch is for sure still alive. That was great news indeed!  Neil understood the importance of his find and took the watch to Citizen Watches Australia at Brookvale who forwarded it to the Tokyo Head Office where they determined at the Product Quality Section of their Tanashi Factory that the watch was made in 1977. Based on my knowledge about vintage Citizen divers it is safe to declare that the exact model number is 52-0110, type 1 dial variant. Read here about this dial.  The watch was found in 1983 but it is unclear for how long it stayed submerged into the salty waters of the Pacific Ocean. Some researchers think that based on the way it looks we can assume it was “diving” for maybe 2-3 years. 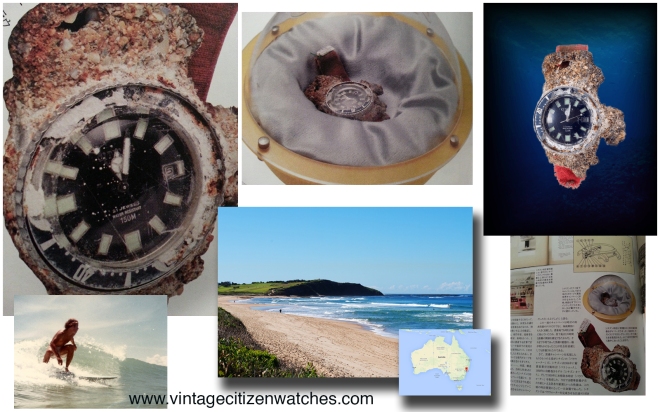 In the picture we can see that the watch is still attached to the red nato strap so I will wear mine (same model, same year) like that for the next days. 🙂

The nato strap and the fact it got lost there make me believe that a surfer lost it while riding a huge wave. It is a nice imagine to picture even though there is no clear evidence this is the true. In the end the mystery is the salt and pepper that makes a good story.  The water resistance of this model is 150m, it has a thick mineral crystal that is well fitted into the case and a screw in large crown. The caseback also screws in so in my mind there is no doubt that these are real tool watches. My 52-0110 diver was pressure tested by my watchmaker and to my excitement passed with flying colors. The movement inside is the automatic Citizen calibre 8210A with 21 jewels.