One of the most replicated (so called “aftermarket”) dials for vintage Citizen watches is the dial for the wellknown “bullhead” chronograph. The original bullhead dial, the one with an octagonal SS case is either black with white sub-dials or white with black sub-dials. If you see one with a different color, for sure, it is not original. Sometimes you can find one that looks just the way it should, but let’s wait a minute. Let’t put on the magnifier and compare the original dial with the fake one.

I have posted two photos. The fake dial is the one where you can see the entire watch, on the left,  all the details are from an original dial, on the right. Click on the pictures1 to magnify them.

In the first picture we can clearly see:

2 – the “TACHYMETER” writing on the aftermarket one is too long (this is why the “500” is misplaced too) and the second “T” on the fake one is after the 1 o’clock hour marker as for the real one the “T” is before the hour marker.

3 – the applied hour markers should have two levels, on the lower level is the luminous dot. On the fake dial the hour marker is flat, without this particularity.

4 – the markings are not correct on the fake one

6 – The tachymeter scale numbers are not allowed to touch the other lines printed on the dial. The execution lack finesse at the fake dial. 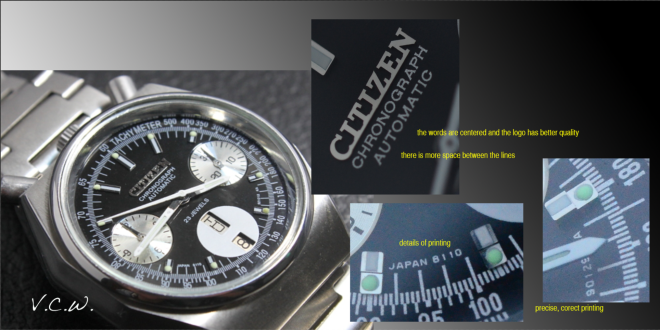 For sure there are other mistakes too but these are the obvious ones.

As a conclusion, I suggest that any buyer and Vintage Citizen Collector should take it’s time (and the magnification) and not waste all this money on fake watches. Remember that “Aftermarket” means “Fake”.