I was and I still am intrigued by the fact that the lume on Citizen watches doesn’t seem to age like the one on Omega or Rolex or other collectable brands. In fact I lusted for an aged, yellow-brown lume for some time now, on a vintage Citizen and was not able to find a good one. They are either perfect green like new, or, on not well preserved pieces, dirty. It made no sense to me. How can I get a nice patina dial? Finally my dream came true with this awesome timepiece!

Inside the case back the model no reads: JTI30705I 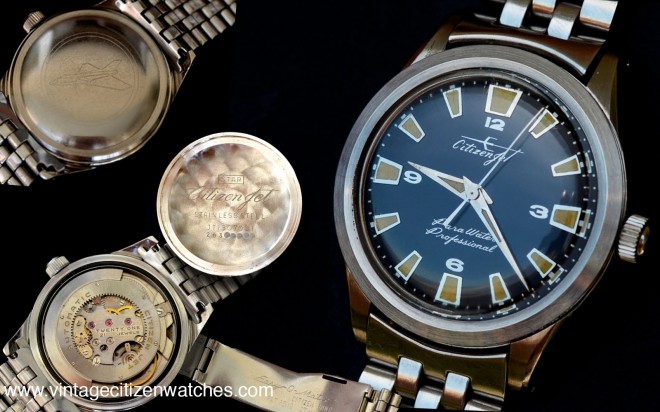 This watch was made in 1962 soon after the introduction of the first water resistant Japanese watch: the Parawater. It also has the Professional label, a rare clasp, a Jet movement and an awesome case back engraving. This was an age when watches had a practical use and not the jewelry that they (sometimes) are today.

The case is made entirely in SS, it is about 37mm and has a simple dial, three hands and no date. The lug hols make changing the original SS bracelet changes so easy! In fact this is a watch that looks good no matter what strap you throw at it: nato, mesh, leather, even rubber. The winding crown is also SS and it is unsigned. At first sight it is very similar with the Parawater I told you about, but this one is not made for water use, but for aviation?. An indication of the link to the aviation is the Jet airplane engraving on the back and the Professional label on the dial. Also a Jet logo is printed on the dial too (Jet movement). In fact the dial has 12, 3, 6 and 9 printed, and the markings: “Citizen Jet, Para Water, Professional”. The hour markers are trapezoidal,  raised and polished. They are filled with (now) the beautifully aged luminous material and so are the matching dauphine hands. All things considered it is a beautiful, simple, balanced face that I like a lot! I have seen very few examples of this model and some of them have an arrow shaped hour hand and a thicker minute one with a flat tip.

The movement is the usual Jet movement with a circular swinging rotor. It runs at 18,000bph as all of them do. This one is the first one made, launched a few months earlier, in October 1961. My watch in made (3-4 months later) in March 1962. It is an automatic (hand winding also possible) with non hacking sweeping central seconds hand. It is called Citizen calibre 3010, Jet movement, and was the first movement that Citizen produced in relatively high numbers. The interesting fact about the rotor is that in earlier types it is marked “Automatic” rather than the usual “Autodater”. The date was added a year later, and so did the name “Autodater”.

And to add to the story… the clasp is marked: “Easy-O-Matic, Citizen Band, Pat.Pend. Stainless Steel” making it even more interesting if that was even possible. 🙂